A Brief Conversation with God 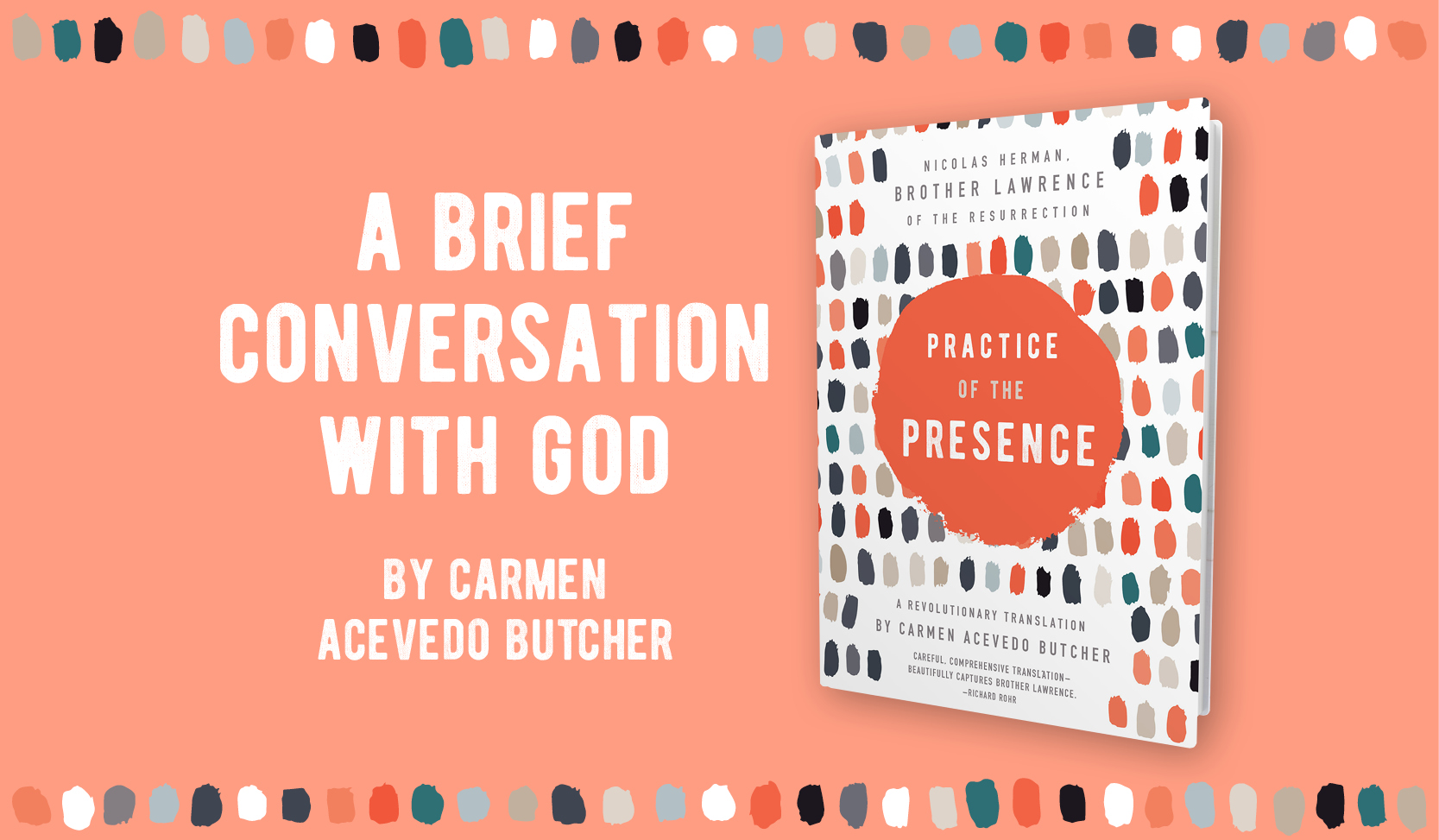 Here is how I first discovered the spirit of the practice of the presence. Walking down the steamy, weedy shoulder of Highway 20, cicadas buzzing, in my mind I had no destination in rural northwest Georgia. Semis and cars whizzed by inches near, but I didn’t care. I wandered hours, often head bowed, shoulders slumped by a heavy burden of depression then. I tried forever, learning I couldn’t fix the slumping, how trauma torques the body. But then decades on, I did find help somehow, a kind doctor, counselor, therapy, and words to name my pain, even begin healing, learn how to stand tall on the inside at least, but on that June day, I was lost and lonely, when I looked up to see a book flat on its back on the gray tarmac, cream-colored pages facing blue sky and waving back and forth in the speed of exhaust fumes at tire level. It looked abandoned.

I ran out in the middle of the busy road to rescue it. Hardback, it had a dark black tread on the inside of its front flap. But all pages were intact. What that book was and what it taught me are a story for another day. The magic of it is this:

Standing in the red dust on the side of that road, I read words on a random page in that book-likely-whooshed-off-a-distracted-owner’s-car-roof, and knew I’d found a friend.

Sometime later, I would read that book’s fascinating introduction, I’d learn everything I could about the author and what else they’d written, and I’d study everything associated with that book.

All that mattered on that day, though, was the first random page opened for me. Every sentence, every word, all that rhythm, every idea, and joy, and difficulty, and human longing—all of that needed nothing to speak for it, not an introduction, not an author’s note.

If this translation of Presence were now decades later mindlessly left on someone’s car roof and blew off, I hope that anyone chancing on it would pick it up, and even if it smelled of gas fumes or had a tire mark from, say, a logging truck, they would read a few words anywhere in it and think, I’ve found a friend.

Also I hope they would experience, in the middle of pain and emptiness, like Brother Lawrence, the strange gift of divine presence, Love. Sometimes that is as curious as a random good book lost in the middle of a busy road. It often happens in a time of darkness. When Brother Lawrence was simply looking at a barren tree one day, he felt hope for his humanness, and divine acceptance, and from that profound encounter grew his relationship with Kindness. Over time, he experienced ordinary moments as extraordinary peace and love.

What is this book, this practice of the presence? Brother Lawrence just calls it the presence. It is a form of micro-prayer done on the fly. A mini-conversation with God. A brief “lifting up of the heart.”

Done anywhere, anytime, the practice is perfect for anyone. We can’t fail at it. It’s shorter than a tweet. It takes less time than sending a text. It’s easy, Brother Lawrence says: “In the middle of your tasks you can comfort yourself with Love as often as you can.” The presence is for all people everywhere: “Everyone is capable of these familiar conversations with God. . . . Love knows what we can do,” the friar says.

Letter 7 is to a nun. The friar wrote this in the time just before or as he became unable to walk. Its theme explores how to handle distractions by practicing the presence. Brother Lawrence understood physical pain as a kind of distraction, and he discovered that this prayer practice creates rest for the mind, an experience of rest that he shares with his friend.

Centuries before the internet, he reassures her: “You are telling me nothing new. . . . You’re not the only one who has distracting thoughts.” He explains the wandering mind as an absence of training: “When the mind has not been taught early on how to return, to be led back [réduit] to itself, it can develop some unhealthy habits of becoming distracted.” Réduit for “be led back,” found in English as reduce, means here that the distractible mind needs to be “reduced.” This réduit is like the reducing that occurs from stirring a homemade spaghetti sauce all day until the arm feels a good soreness and the rich redness of the sauce deepens, spices open, and it reduces beautifully, condensing into a sweeter, tastier food. Réduit conveys his prayer’s essential motion: “leading or bringing [ducere] back [re-],” where the re- expresses gentle, healthy repetition, a “going back . . . to the original place” of our truest self. Another meaning for réduit is “withdrawing to be restored,” and in Cotgrave’s 1611 dictionary: “conducted home againe.”

The friar’s instruction is especially relatable, as our minds crave this rest of being present, especially when distractions are not merely analog anymore, like a knock on the door, but are a constant rewiring of our brains via interfacing with computers, ubiquitous screens, and a 24/7/365 internet.

Distraction, like its word-relative tractor, has a “pulling” movement in it: the Latin root trahere, “to drag.” Distraction is “a being dragged in different directions.” When our humanity feels tenuous, we sense a need for sustained refocusing of our attention on Love. Brother Lawrence teaches the practice of the presence as a remedy for distraction.

He presents the prayer as a mindful “going back,” a calm invisible stretching toward the source of selfhood. His favorite verb for the presence is tenir, for “hold or keep,” from the ancient root ten- for “stretch.” In this brief letter to his distracted friend, he repeats tenir four times: “Hold still before God,” “[K]eep your mind in God’s presence,” “[Keep] holding it there,” and “Hold it attentively in God’s presence.” This “holding” is not static, nor a numbed gripping. It is the soft stretching-toward someone that creates embrace. Practicing this, we notice that resting takes muscle too.

This prayer practice is a gentle soul stretching.

To a Nun: Don’t Be Discouraged

You are telling me nothing new in your letter. You’re not the only one who has distracting thoughts. The mind is extremely likely to wander, but the will is the mistress of all our powers, and must draw the mind back and carry it to God as to its final end.

When the mind has not been taught early on how to return, to be led back to itself, it can develop some unhealthy habits of becoming distracted and scattered. These are difficult to overcome. These tendencies ordinarily drag us off to earthly things, in spite of ourselves.

I think that a solution for this is to admit our stumbles and humble ourselves before God. During set times of silent prayer, I advise you not to use many words. Long discourses often create distractions. Hold still before God in prayer like someone who is poor, who is unable to speak or walk, and who is waiting at the gate of a wealthy person. Do your best to keep your mind in God’s presence. If it wanders or pulls away sometimes, don’t be discouraged. Distress tends to distract the mind rather than to focus it. We must use the will gently to bring it back. If you persevere in this way, God will have mercy on you.

An easy way of bringing your mind back during the set time of prayer and holding it there more at rest, is not to let it wander much during the day. Hold it attentively in God’s presence. As you get used to thinking of God from time to time, it will become easy to remain calm during times of prayer, or at least to bring the mind back when it wanders.

In my other letters I’ve already spoken at length with you about the benefits gained from this practice of the presence of God. Let’s devote ourselves to it seriously and pray for each other. I commend myself to the prayers of Sister N— and of Reverend Mother N—, and am yours in our Friend, 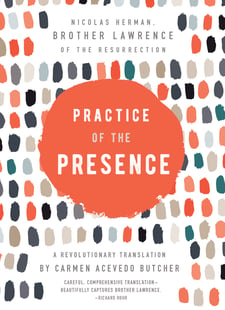 This is an excerpt from Practice of the Presence.

Carmen Acevedo Butcher, PhD, is an author, teacher, poet, and award-winning translator of spiritual texts. Her dynamic work around the evolution of language and the necessity of just and inclusive language has garnered interest from various media, including the BBC and NPR's Morning Edition. A Carnegie Foundation Professor of the Year and Fulbright Senior Lecturer, Acevedo Butcher teaches at the University of California, Berkeley, in the College Writing Programs.