Be a Witness in the World 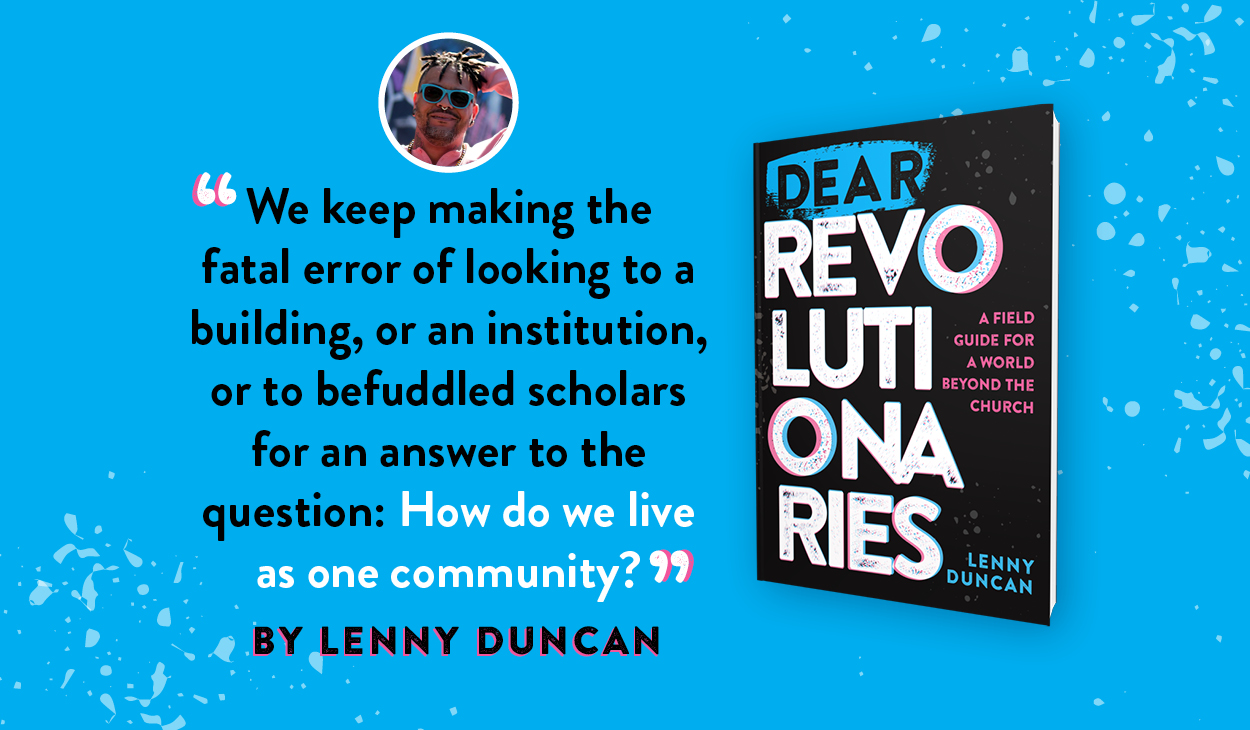 I’m always told by well-meaning older white peers that it’s great to be prophetic, but you must first and foremost love your people—as if I couldn’t possibly do both.

I describe myself as a witness in the world. Not a Christian, not a disciple, not a teacher. Nor do I even like to use the term “pastor” anymore. I claim the term “witness” for what I think my active role in God’s work is. This is because we as humanity have learned there is a difference between being a bystander and a witness. This has been explained by historians to great effect during the Holocaust. All over Germany during World War II, in small towns, where people thought they were either doomed or blessed to live small lives, they instead were left with the only choice we as the children of God are ever left in times of great evil. That is to either be a bystander, or a witness.

I will explain what I mean by “bystander” first. Places like Buchenwald, Dachau, and Ravensbrük were situated near small villages and towns. Villages and towns full of everyday people who on their way to get a cup of coffee and paper on their way to work stood by and watched during the greatest acts of horror known to humanity. For the most part, researchers found they were indifferent to the horrors happening within their once sleepy little towns. Happy the new government was building industry near the town and not interested in the fate of prisoners down the road. They were mostly Marxist and degenerates, right? Much like today, everyday people went about their business. They went to work. They fell in and out of love, wrote symphonies and plays, and created great big edifices in locations like these towns. No apocalyptic end-times location. This wasn’t Gehenna—this was the everyday horror of an empire consumed with fascism.

These were little towns full of ordinary people doing ordinary things. Everyday. Having no significance other than the convenient access to logistical planning of a burgeoning military industrial complex. Perhaps they saved a few pennies on coal for the trains? Maybe troop deployments and the ability to conceal their crimes. After that meeting of Reich leaders on one cursed lake, on the fateful day they uttered the words “Final Solution,” perhaps it was just the random idiosyncrasies of bureaucratic convenience and industry all dancing together to create a bloody red footprint across the world stage. People far smarter than me, mostly women, have examined this point in history. The why, the how. The mechanics of how that much evil going so near, so close to some towns, that the smell of the furnaces would hit on stormy winter days while people watched sporting events. They attended parties. They had tea with friends. They stood by and watched.

Neither I, nor anyone, has done anything “prophetic” in the church in a very long time. It’s why I even resented the assertion by peers when I was a pastor. At the time, I said: “I’m always told by well-meaning older white peers that it’s great to be prophetic, but you must first and foremost love your people—as if I couldn’t possibly do both.”

First of all, we kill the prophets. Stop wishing death on marginalized people because they are being brave. Speaking up. Being moved by the pain in the world and forced to wail because of compounded trauma, reacting to the real-life impact of white supremacy, is just what any living, loving, sentient being does when it witnesses the sorrow of others. Truly. It is by seeing, touching, tasting, and walking with others’ pain that we get to touch the Divine. I can tell you that it feels like empathy, and I believe it may be the only true empathy left in the human experience, to witness the perfection of Creation choking and screaming for his Mama.

To see the life drain from the eyes of a child of God only armed with a toy, or a bag of Skittles. It isn’t until you see Jesus being tear-gassed as a rabbi named Benjamin or a pastor named Sara while they pray for the Holy Spirit and Sophia to come down at once in a hail of plastic bullets. The Holy Spirit being a ragtag line of moms who have been beaten for weeks. The last time I saw God, they were standing outside the justice center in Portland, Oregon, summer of 2020. In person at least. In the flesh. Screaming at the temple and Herod all over again. Pilate sending troops. The people caught in between.

The summer of 2020 was full of witnesses. People who were transformed by what they saw. They didn’t see it in the pews, on an altar. Not a damn bishop in a “major denomination” said anything that helped. At all. Trust me, I looked, and I was one of the most affected. On the front lines as the kids say in the never-ending war in my neighborhood. If you have been looking for Christ your whole life and you didn’t go out and witness it all for yourself, well, frankly, you missed him.

Were those prophets on the street? The so-called progressives in the church will tell you yes. But ask them to tell you about the prophet’s retirement plan in the Bible. I’ll wait. The church desires prophets because it desires blood and scapegoats.

Those were witnesses. Those were the multitudes of Revelation. That was the heavenly host whose body armor was laced with white bolts of cloth from the ancestral realm, seraphim armed with the truth. That was the host singing hosannas and most of the church missed it. Millions around the world were going out to witness despite the danger during a worldwide pandemic, and we for the most part didn’t do shit.

We keep making the fatal error of looking to a building, or an institution, or to befuddled scholars for an answer to the question: How do we live as one community?

The answer is simple. You just do. You are the only one with the keys to your freedom. There are no pat answers. You are either going to be in community or you aren’t. You are either tired of the death tally or you aren’t. These last few years have either woken you up or they haven’t. This book isn’t like Dear Church. I am not trying to convince another person ever again what these times we find ourselves in mean—I am talking to God’s kids who have ears to listen. The endeavor of awakening our siblings has stolen away real opportunities to turn the wheel of Telos in the direction it demands. Strategically, it would be a waste of our time fueled by the white supremacist idea that we must prove in some public debate the notion that reality thrives with diversity, life, and God is often experienced, if not always, as an opening of the floodgates of liberty, grace, and freedom. That God wants us all to just be able to grow and reach for the heavens like flowers in a garden. That if humanity is the Creator’s greatest piece of art, then why are we so hell-bent on destroying it? The fact that we even entertain anything else, ontologically, theologically, or systemically within the construct of the modern church, says a lot about who we have become.

God in. Breathe in. God out. Breathe out.

God has to become a living ecosystem that you are invited just a little further into. A little further off map to explore. A mystery you are coaxing out of the fabric of the world. Not a program you can follow or a training you can attend. The church has tried to train good Christianity into the world through various means for eighteen hundred years. How is that working for us? Your pastor, your theology, this book, no one can give you the required ingredient: embodied sacred experience with the Divine.

Your soul has to experience it. See it. Witness the pain of the world not as a bystander clinically studying it to see how it benefits your siloed community but as an invitation from an old friend who knows God is everywhere, even inside you. The you that has been deadened by what the church has become. What we have become. We are a people who have collectively forgotten the most stunning truth that the Nazarene imparted to us—the Divine lives in us all. That Spirit of power, healing, and boldness imbued in the seventy-two thrives in our wonder, complexity, and doubt.

To become a witness, your very life must become a fragrant offering to the Creator, your house a temple, your very breath a prayer. It’s not a matter of trying to be all these things, or learning to do all these things. It’s about realizing you are all these things. In the same way we often don’t see how fragile the lives of our siblings truly are, we often aren’t taught to embrace the mighty things each and every one of us is capable of. The things we were promised by Jesus, through the Apostles. Never once were they meant to be professionalized to the point that the followers of the Way wouldn’t even recognize the simple act of creating your own holy meal. That we wouldn’t know how to bury our own dead when we couldn’t gather. We have drifted so far from a movement from the bottom up that the idea of an altar in your own home seems strange to the average “Christian” today. This infuriating belief we all seem to suffer from is that the Kin-dom of God is unfolding everywhere but our own homes, our own lives.

The first step to becoming a witness is to start to witness God in your own home. You know the reverence you feel, or are “supposed” to feel when approaching the altar at church? What if that could be in your own home? That feeling that the air is thin and one could almost pierce it like a veil and a whole other world awaits you on the other side. The feeling of drinking cool water after a long hot hike, the way everything inside is made right as your parched throat is met with the living water we drink every day. That’s what faith communities are meant to be: a respite in a lifelong journey, a way station on the Road of Mystery to the Almighty. Instead, these institutions have made themselves into the journey. Today, you will start to dismantle that block from your journey. 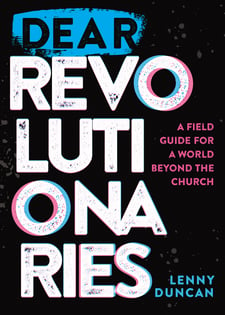 This is an excerpt from Dear Revolutionaries chapter 3, “Witness > Prophets.”

Lenny Duncan (they/them) is a writer, speaker, scholar, and media producer working at the forefront of racial justice in America. Lenny is the author of Dear Church and United States of Grace and co-creator of the podcast BlackBerryJams with PRX. A PhD student in historical and cultural studies of religion, Lenny is currently investigating the theft of African spiritual thought by white American Esotericism. Lenny is originally from West Philadelphia, has hitchhiked thousands of miles on American byways, and now makes their home in the Pacific Northwest.