When Molly was nineteen, she tried yoga to spend some time in her body. Strong and graceful, she felt her identity as a chubby kid and her struggles with body image ease a bit. Yoga gave her a connection to her breath, a hiatus from the world, and a path into her body.

At age twenty-five, Molly had an isolating job and a controlling boyfriend. Wanting to expand her tools, she took her first pole-dancing class and loved it immediately. In Philadelphia at the time, pole-dancing was still considered taboo. Its naughty reputation added to its allure. Yoga and pole-dancing became escape tactics that brought Molly relief. As someone who believes every woman should be able to parallel park and do a pull-up, she felt like she had arrived. Her bodily strength overflowed to her mind and her life.

Molly’s pole-dancing friends had a different way of being in the world, and they tended not to care one lick about what other people thought. When Molly danced, she felt like herself. Her body was strong and beautiful. She stopped dating jerks and proclaimed dancing as her significant relationship. Her pole became her dance partner. It never talked back, stepped on her toes, or abandoned her. So Molly danced, and she got good.

Then, Molly got diagnosed with Stage 2 cancer in her left breast. It felt like betrayal. Her body, the place she went for safety, was trying to kill her. She had nowhere left to escape.

Molly’s body ceased to be her own. Treatment made her too sick to do yoga or dance. The long mermaid hair covering her breasts sizzled and fell out. Newly bald, there was no hiding. Yet hair grows back. Breasts do not.

After studying the list of horrifying options, Molly opted for a double mastectomy. The surgery was hard, and she thought the scars were ugly. It is an amputation that comes with all sorts of stereotypes. When she tells people that she is a breast cancer survivor, most people look at her breasts instinctively. She came to despise pink ribbons. Pink ribbons are cute. There is nothing cute about breast cancer. Cancer is grotesque.

Losing her hair and her breasts felt like a direct attack on the strong and graceful femininity Molly had earned and claimed as hers. She spent more time applying makeup and shifted her nail polish color from black to pastels to add a sense of femininity to her bald head and flat chest. She didn’t want to look sick. She listened to podcasts and TED Talks during her treatment to make sure she had something more interesting than her health to talk about when someone asked in a sad, puckered voice, “How are you doing?”

Then, in one of her reconstruction appointments, the plastic surgeon told Molly her skin was too thin for nipple reconstruction. In that moment of all moments, the bottom fell out. She imagined her body without nipples, and she felt like a circus freak. It was this piece of information that made her fully realize she would never again line her hands up with her nipples in low plank during yoga. She would never breastfeed a child. She would never have a partner suck on her nipples to arouse her. In fighting for her life, her body shifted irrevocably. There would be no return to normal. There was no going back.

When Molly looked in the mirror, she couldn’t see herself in her reflection. She had gained weight. She was pale. Her eyes looked scared. Molly sifted through her options. She could go nippleless. She could get a 3D nipple tattoo. She could implant objects in her breasts that looked like nipples. She found a lab growing nipples not yet approved by the FDA.

Then she remembered a friend who had recommended a tattoo artist who specializes in botanical tattoos that cover mastectomy scars. She didn’t want to see her scars anymore. As soon as she googled his work, she knew her chosen way forward was no nipple reconstruction and instead, a gorgeous, sprawling chest tattoo.

Molly texted back and forth with David, the tattoo artist, for six months. She told him she wanted to look like she walked into an enchanted forest and came out wearing flowers. And, she added, she didn’t want it to look like she was hiding. He showed her three mockups, the first of which was perfect. Sweet smelling peonies burst forth in the dynamic, asymmetrical design. She put a deposit down and traveled to Chicago for her eight-hour session.

Molly’s tattoo was a pivot toward recovery. She bought shirts that show off her tattoo. It helped her live into her new reality and find home in this version of her body. Her new normal. A marker for the next phase of life.

Her chest remains a very charged area of her body. The body remembers. Once on vacation in the Dominican Republic, she got a massage. When the woman touched the muscles just below her collar bones, she burst into tears. Another time, a man she was dating texted her that he was going to hop in the shower, and that she should come join him. She responded with sheer panic, sobbing. She used to love showering with people, but nippleless, it felt too vulnerable, too soon and too scary. When she told him about her hesitation, he responded brilliantly and with great understanding, then offered to suck her nippleless breast whenever she wanted.

Molly went to graduate school to become a physical therapist specializing in the pelvic floor. Her body has endured so many dings, like a young cancer diagnosis, and she wants to hold space for people when they are uncomfortable. Physical therapists are supposed to optimize movement in daily living and well, sex is part of daily living. So many women, because the pelvic floor is so private, live with discomfort they assume is normal but really can be improved. Molly doesn’t want to do physical therapy for cancer patients because it will reinvigorate her trauma, but she does think the discomfort her body has been through helps her be able to support healing for someone in a different vulnerable and often feminine context.

For a long while, Molly didn’t return to yoga or pole-dancing. Her chest felt tight and restricted, and she didn’t want to explore how those two activities might now be harder and different. She didn’t want her peers in those communities to expect the old her to be the one coming back.

It was the global pandemic of all things that invited her return. She has a pole and a yoga mat in her apartment, and she explores the activities in privacy. She streams online yoga classes and joins her pole-dancing friends on Google Hangouts every Friday night. She bought a bike and started an anti-inflammatory diet. She finished grad school and is helping her patients learn about their bodies and live into healing. She loves her tattoos, which helps her be tender to the story living and breathing in her chest.

Slowly, she is building trust with her ever-unfolding body.

Listening to Molly, I realized I take my nipples for granted. Hearing her body story opened my own relationship with my body. Molly told me her body story via Zoom during the pandemic while she was living in Philadelphia and I was living in Minnesota. Molly showed me pictures of herself at different stages so I could see the transformation of her body. I saw her chest and hair before cancer, and during and after her tattoo sessions. It struck me while listening to her how present she is in her body. She inhabits it in a way that honors her transformation.

At different points during the conversation, she got up to grab a snack, she took a break to go to the bathroom, she told me part of her story while standing, and she grabbed a therapeutic cane to tend to muscle knots in her shoulders and back while she was talking.

After we signed off, I stood up for the first time in a few hours and realized I should have taken care of my own body in all the ways she took care of hers during the conversation. I claim to be an embodied person, and yet at times I struggle to listen to my body and address its needs. Molly affected me with her story and with her embodied life. It struck me that she allowed her body and its needs to take up space in the world. It’s inspiring and invites me to do the same.

Is there a part of your body that makes you feel different, or marked, that you are ashamed of? Will telling the story of that body part soften something for you? 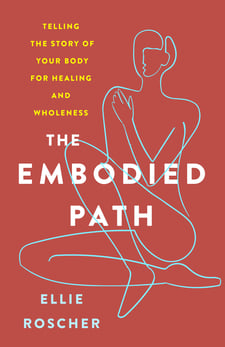 This is an excerpt from The Embodied Path chapter 4, "Bodies Transform: Embracing Our Ever-Unfolding Identity."

Ellie Roscher is the author of Play Like a Girl and How Coffee Saved My Life and coauthor of 12 Tiny Things. She hosts the Unlikely Conversations podcast and teaches writing and yoga at The Loft Literary Center, the Minnesota Writing Project, and Up Yoga. She has an MFA in Creative Nonfiction Writing from Sarah Lawrence College as well as an MA in Theology from Luther Seminary. She lives in Minneapolis with her spouse and sons.