Every Body is Essential 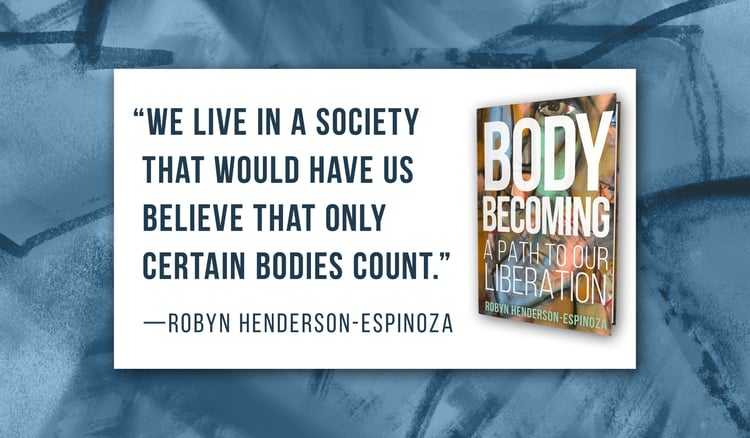 I was taught that I wasn’t better than anyone and that no one was better than me. Yet as I was growing up, I also wondered why my skin was a different color than my birth mother’s skin. This started when I was maybe five years old. My mother asked me if anyone ever made fun of me for the color of my skin. That’s the first time I noticed we were different.

From that moment on, I wondered why people were treated differently, and somehow, in my body wisdom, I knew that not every body counted the same as others, but it would take me years to have both an embodied awareness of this wisdom and the analysis to support this embodied awareness. Poco a poco, I say.

As an adult who has lived through the Ferguson uprising, the Black Lives Matter movement (ongoing), and the Charlottesville white supremacist rally, among other protests and uprisings, I worry about the role of power and control and the ways that structural power keeps some bodies down, on the underside of history. I worry about immigrants and refugees and the policies that the government has or doesn’t have in place to protect these vulnerable populations. Their bodies count too, don’t they?

We live in a society that would have us believe that only certain bodies count, which is why the hashtag #BlackLivesMatter is so necessary. We’ve created a hierarchy where power over certain bodies has determined their fatal fate. Why is it we don’t want everyone to flourish? And why don’t we consider the bodies that don’t look like us as fully human? I still can’t believe that while white women got the vote one hundred years ago, Black women didn’t get it until the ’60s. Whose bodies count?

Having lived in a time of a persisting global pandemic where the United States continues to have upticks and an enormous case load, I’ve seen the health disparities revealed in new and staggering ways. Why have Black and Latinx people been at higher risk of Covid-19? Why has the coronavirus seemed to more aggressively attack these communities? Whose bodies really count right now?

Not only did the global pandemic demand answers to this question, but as I watched the murder of George Floyd on various media platforms, I could feel in my bones the answer: not every body counts. This knowledge keeps repeating itself through every twenty-four-hour news cycle and every social media feed. How many other non-Black persons could feel the awfulness of George Floyd’s murder? And why does it take violence to assist us in connecting with our bodies?

Not every body counts, I remembered thinking, watching social media videos of him dying. I’ve known this for years—when Trayvon Martin was murdered, I knew that our country was consuming Black grief but refusing to come to terms with the racial inequity and iniquity that this country harbors. When Mike Brown was shot and killed, his body left lying in a pool of blood in the summer heat, I knew once more that not all bodies count. As a NonBinary Transgender Latinx, I watch the count of Trans murders grow every year; it’s a staggering count, many of whom are Trans women of color murdered at the hands of toxic white masculinity.

Not every body counts. No wonder our democracy is a consuming, raging fire around us. Prior to Covid, when I was traveling all the time and chasing airplanes to give talks and live a life as a public scholar and intellectual activist, I was very aware that I could end up in a dumpster somewhere due to being a Transgender person. It might be unlikely because of my skin color, but I knew that because of my gender identity, I might be subject to violence. So when I ask the question Whose bodies count? I am also asking if my body counts as we rethink our body politics and our curiosities around how to create conditions for the kind of world we all long to inhabit. “Para todos todo, para nosotros nada,” as the Zapatistas say—for everyone everything, for us nothing. I am inspired for another possible world!

I know that I’m not the only one asking these questions—people on all sides of the political spectrum are as well. To myself and to others, I ask if we can steward a politics of being en conjunto—and really invest in a world where togetherness can create a politics of what is possible for each of us, all of us. The term en conjunto is not easily translated into English. The best translation is “together” or “being together,” but it is a richer, more robust phrase suggesting something beyond just togetherness. It’s like a ride-or-die partner! Can we have that kind of political orientation in our world today?

The difficult start we’re called to make is with all the privileges many of us have. For instance, my body counts in a lot of places because I have three little letters after my name: PhD. I am legitimated in ways other people are not. I bring this up not to discount the hard work I’ve done to achieve my education but to talk about how my assimilation into systems of higher education was not only a survival skill but a narrative I internalized from the time I was a kid. My birth mother told me when I was young that education was my way out. So at an early age, I learned to apply myself from my cerebral place, living my life from the shoulders up. My work now is to relax into my body and figure out how to create the kind of world we all long for. So I am counted as “good” because I’ve achieved education, but I am not counted as “good” because I am Transgender and Latinx. It’s a mixed bag. And my embodied life is still emerging on a path of liberation for me as I also learn what that looks like on a collective scale.

How do we dismantle a caste system that reserves what is “good” only for those legitimated by the logic of dominance? This is the pernicious evil that creates such a disembodied society. As a culture and society, we have come to value the professionalization of life and work. But what of those who don’t have the same path—can we imagine a society and culture that values different paths and composts the existing hierarchies and caste systems? How can we create a culture and society that values all bodies? We are in a moment where unless Black lives matter, we are missing the mark. With this, we must figure out how to make visible Brown bodies, because if we perpetuate the Black/white binary, we end up making people like me and other Brown bodies invisible. Poco a poco.

I don’t necessarily have the answers or know how to do this kind of work, but what I do have is an imagination of a different future. For those who look to books to understand how to be antiracist, my take is this work is really found in the body, in becoming embodied, and in relationships. We can read all the books, know all the histories of the displacement of Black people, Indigenous folks, and non-Black people of color globally and locally, but unless we have an embodied awareness of this, we won’t really be able to overhaul the acceleration of the anti-Blackness and anti–people of color mentality that is so pervasive throughout the world. We must learn how to compost the bullshit.

When we do this inner work, we begin to see the underside of history with better eyes, eyes that invite relationship. When we turn from the violence of humanity and turn toward relationally centered practices like nonviolent communication, we reduce gaslighting and other forms of diminishment and erasure. To count every body as human and valuable is essential, difficult work, but I believe in the work of community and the ways that being in community can transform society. And I believe in the power of love. I’ve seen how love, when enacted in revolutionary ways, can hold the complexities of each of our multiplicities and call forth a more perfect union. I believe in our capacity to guide one another into this new vision of humanity. And I believe we can learn to love ourselves enough to love those who we had formerly called other, those who are not like us. 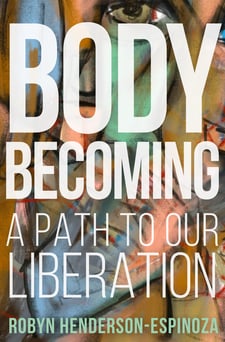 This is an excerpt from Body Becoming chapter 2: “Whose Bodies Count?”

Dr. Robyn Henderson-Espinoza is a transqueer activist, Latinx scholar, and public theologian. They are the founder of the Activist Theology Project, a collaborative project committed to the collective work of social healing. A thought-leader, teacher, ethicist, and poet of moral reason, Henderson-Espinoza is a visionary thinker working at the forefront of movements dismantling supremacy culture and bridging with radical difference. They live in Nashville, Tennessee.