The Journey of Forgiveness 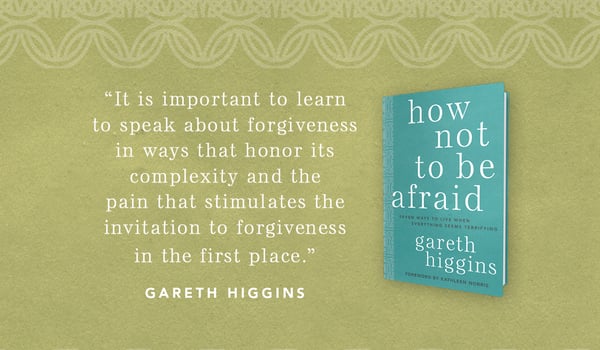 Some of us feel incompetent most of the time; most of us feel this way some of the time. Some of us were formed in environments that shame us, and we learned to be at war with ourselves, overstating the harm we think we have done and ignorant of the places we might actually make amends. Many of us go through life with the fear that we have done something irreparable. We are caught in the memory of a circumstance that may have happened only once but recurs in the mind as if it were taking place right now.

In this very moment, I can call up the teenage memory of making a snide comment about someone who by accident overheard it; the twentysomething embarrassment of making a romantic step toward someone who turned me down; the more regular anxiety that I am completely alone with my fears. This is not true, of course, but it is real.

There is a personality to these fears. You could say they are like darting yellow jackets, buzzing in the back of the head, threatening to sting the life out of even the happiest day. They have stolen my joy more times than I could count.

The fact that there are nasty little stingers there in the first place is a pretty ancient and universal fact. We’ve all had the experience of feeling guilt and being too afraid to apologize for something, lest our shame overcome us. And we’ve all had the experience that when we finally did apologize, the person we thought we had wronged didn’t care about, didn’t notice, or actually welcomed what had happened.

The converse is true as well. We’ve all nursed wounds or borne grudges about things we just knew not only had taken place but were done with malicious forethought, despite the alleged offender being entirely unconscious of the offense. This little lie has the most power when we tell it about people we feel close to, for the wounds of a friend cut deep. Perhaps the deepest cuts come from friends who didn’t even know they were cutting. The scenario is all too familiar: one friend feeling hurt by another, who doesn’t even know, and the friends going their separate ways because neither is willing to let down their guard. We’ve all lost friends this way. We have probably all rejected friends this way too. When the bees buzz, sometimes it’s us doing the stinging.

One of the marvelous things about human frailty is that the roots of the solutions to our most seemingly intractable problems are found inside them. Oppositional energy, says Richard Rohr, always re-creates itself. So fighting against our fear and anger and shame simply makes us feel more afraid, angry, and ashamed. If we slow down and think for ten minutes, we may find that the answer to our struggle is within the struggle.

Because it’s not just our friends who have hurt us (or who think we have hurt them). We are hard enough on ourselves without needing to add anyone else into the mix. You likely subject the magnificent and beautiful person you are to even harsher judgment than that which you direct to people you might even consider your enemies. You have likely judged yourself worthy of public flogging more times than you can remember. You have made betraying your inner glory into a way of life. You have done this because our culture teaches us to see life through a myopic lens.

The antidote to the fear of having done something that can’t be fixed is to accept the fact that you probably already have or that you will in the future. Forgive yourself. Not that you get a free pass for being a jerk (or worse). But even my friend Don, one of the saintliest humans I’ve known, grieved his divorce by saying, “I thought I’d get through this life without hurting anyone. I was naive.”

But there’s better news: just because something cannot be fixed does not mean its wounds cannot be healed. Again, the beautiful thing about human problems is that they contain their solutions. If I want to have better friends, I have an opportunity in this very moment to become a better friend to myself. If I fear having done something that can’t be fixed, I might remember that my perception is a story I’m telling myself. This story doesn’t fundamentally belong to me, although I may have loaned myself to it for so long that it thinks it owns me.

That is the minimum we can assume to be true: that we never know when a story is over. And if you’re struggling with your story today—either the one you tell yourself about how you’ve been hurt or the one about how you’ve hurt others—there are two ways to move from that place. You can keep telling the same story and live in the past (or the future). Or you can make what our brothers and sisters in twelve-step programs around the world call “living amends.”

What does it mean to live amends? If you feel you’ve done the hurting and you are sure it would not add to the pain of the hurting person, gently ask if they would be willing to hear your apology and offer of amends. They get to decide. If you’re not confident that you would not add to the pain by directly acknowledging the impact of your actions and offering amends, then live your amends in another way. If you feel you are the one who has been hurt, then do two things: Seek a friend who will listen to your pain with empathy and healthy boundaries (both their own boundaries and the ones they will help you hold), and in the meantime, show kindness to someone else today. Do it intentionally and in a way that interrupts the flow of your day. I promise you, what will happen will look like a miracle. Because the other wonderful thing about the solutions to human problems being contained within the problems is that kindness works like sound waves in a perfect acoustic chamber. Kindness shown to another bounces back into you, as if you were giving your inner glory the most magnificent smile.

Perhaps you’re thinking, That’s easy for you to say. I can, of course, only imagine your particular fear, just as you can only imagine mine. So for those of us who have come to believe that this fear—the terror of having done something that can’t be fixed—is one we are simply doomed to live with, here’s a little final note. Of course it may seem easier to diagnose a problem than to implement a solution. Those beautiful ones who are struggling daily with inner voices that seek to restrain, inhibit, assault, or curse are heroically giving themselves to the journey toward being more human. They are magnificent, and they deserve the kindest, most loving energy to support them.

At the same time, those who have indeed made terrible mistakes face an often lonely road toward restoration. The retributive element of our culture mitigates against such restoration, for both the people responsible for causing suffering and those who have survived. Don’t get me wrong, there is a place for healthy lament and proportionate mourning of what we have done. But making appropriate amends is not the same thing as taking revenge on yourself. There is a task of discernment to be done to figure out the difference between a healthy conscience and narcissistic or masochistic delusion.

It is also important to learn to speak about forgiveness in ways that honor its complexity and the pain that stimulates the invitation to forgiveness in the first place. Much is spoken about forgiveness, little understood, and too often survivors of great violations may be shamed or even retraumatized by the pressure to embrace the person responsible for the violation or to deny the gravity of their impact. I prefer to see forgiveness as a continuum that begins even before the violation occurs, with a life of compassionate boundaries arising from a deepening acceptance that humans often “know not what we do.” When a violation does occur, pain must be honored—not only is it the psychologically and spiritually healthy response, but to do otherwise would be to continue the violation. And with the pain will likely come an impulse to hurt the violator. The forgiveness journey continues when we choose to withhold revenge—and this is not the same as pretending there should be no accountability or that there is no need for amends. In situations where great violation has occurred, we need supportive community to surround us, to share the burden as best as is possible, to help us step back from the brink of either returning an eye for an eye or harming ourselves. Depending on the nature of the violation, withholding vengeance can be a heroic act. And if the survivor does nothing more than withhold revenge, they should be affirmed as being on the forgiveness journey, respected for their courage, and not pressured to do anything that would further violate their well-being. Such loving attention, such patience, such tender holding of those who have been violated can, of course, help create the conditions whereby further steps may be taken on the forgiveness continuum. A society fluent in forgiveness as a journey that cannot be coerced and in accountability as restraint and restoration, not vengeance, would be a society in which survivors would do more than merely survive, and even those responsible for the violations could be transformed for the better.

Forgiveness is not understood in the dominant culture as a gift that can release both perpetrator and victim—at least not yet, but there are hopeful signs. Perhaps an equally great gift is when each of us locates the place within that can empathize with even those responsible for the worst human behavior. This is not to justify their behavior but to participate in the process of both healing the past and nurturing a more whole future.

As with all fears, the fear of having done something irreparable diminishes in the face of acknowledgment that someone, somewhere, has the same fear. And in some sense, each of us has left an irreparable mark on the world, redolent with both light and shadow. 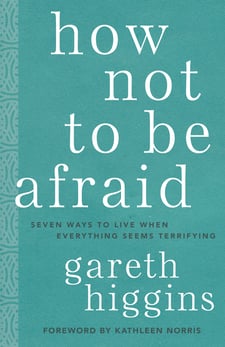 This article is an excerpt from How Not to Be Afraid, chapter 7. Click here to learn more.

Gareth Higgins is an author, storyteller, and activist who was born in Belfast during the Troubles in Northern Ireland and now lives in Asheville, North Carolina. Higgins has a PhD in sociology and speaks widely about storytelling, violence reduction, the power of dreams, and connection with the earth. He led a peacebuilding community in Northern Ireland, and helped to found the Wild Goose Festival, the New Story Festival, and the Movies & Meaning festival.