Justice Is the Nature of Being 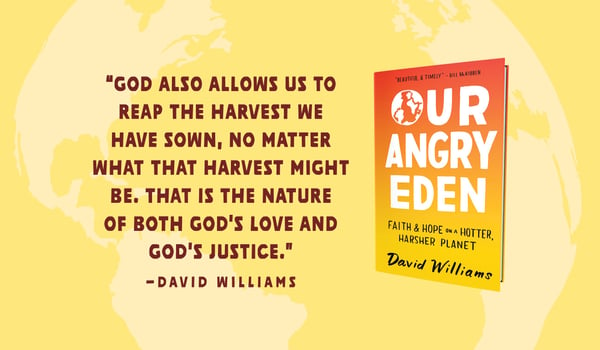 I arrived at the church for a gathering. The theme of the gathering was creation care. Creation care, if you’re not familiar with the term, is a theological approach to our environment, the idea that we should love and cherish the earth that God gave us. It’s a lovely, sweet idea.

We Jesus-folk gathered, and we sang. Drums were beaten, because my denomination bends liberal. Good, warm words from Scripture were spoken, some of them in Hebrew, because we are Presbyterian and we enjoy that sort of thing. Earnest songs were sung in delightful harmony. At the end of the event, we were given a charge: go home and share your reflections on creation care with friends, family, neighbors, and acquaintances.

So I sat, and I thought for a while, and then I bore down and wrote this book.

There is an assumption among religious progressives—and it is a well-meaning one—that human beings need to care for creation because it is so terribly fragile. Here we are, dumping plastic into our seas and filling our shallow skies with the carboniferous flatulence of our strange, anxious busyness. We are razing our mountaintops to tear out their profitable hearts. We are raising and slaughtering creatures by the hundreds of millions in industrial facilities, inflicting horrors upon horrors on simple, suffering beings. We are reaching deep into the seas and scraping them bare, denuding them of life.

Poor creation, we think. Poor dolphins and butterflies. Poor lambs and baby polar bears, we think. We must protect our poor fragile planet, we think.

There is also an assumption among religious liberals that we should protect creation for aesthetic reasons. Because it is beautiful. I don’t for a moment dispute this. Seas and stars, storms and aurora? Beautiful. Life itself, from the tiniest budding crocus to the serene majesty of a blue whale? Amazing, complex, miraculous. I am deeply sympathetic to this position.

As anyone who knows me will tell you, I’m the first one out there when severe weather rolls in. When the local news station cuts to Storm Team special coverage, I’m almost giddy. That feeling of the wind rising, of the sweet, sharp, electric tang in the air as the sky grows dark and rich and dangerously alive? I love it.

And when creation is smaller and slower and more subtle, I find it equally fascinating. When I was a little boy, I could spend an entire afternoon watching ants at work. I could spend a whole Southern summer evening spitting watermelon seeds and marveling at trees alight with the faerie glow of fireflies.

I see the stars, I hear the rolling thunder, as the old hymn goes: God’s power throughout the universe displayed. When creation speaks, I pay attention. I am fascinated.

But there’s another truth, another facet to how I view the world around me. God’s creation scares the heck out of me. (Lord have mercy, does no one read Jack London anymore? No, I suppose y’all don’t.)

The delicate balance of our planet’s ecosystem to which we’ve spent the last few million years adapting? It can be rough but nowhere near as harsh as it is becoming. As we change the makeup of the atmosphere upon which we rely for life, and as the temperatures of our world begin their inexorable rise upward, we should expect to receive back what creation returns to those who meddle with it or imagine they rule it.

If we abuse it, it will not tolerate us. God’s creation owes us nothing, and it isn’t known for being forgiving.

Our angered Eden is red in tooth and claw, as Alfred, Lord Tennyson, puts it. It is as implacable as the rising sea, or the storm that scours and shatters, or the fire that rages with the driving wind. It has always been a terrifying thing. The fierce new world that we have woken is no less willing to break us than our old familiar world, and it’s a whole bunch meaner.

And that’s just our tiny, agitated blue speck of a planet. When I say the words “God’s creation,” I don’t think of the earth. Creation is not a synonym for earth to me. Not at all.

I think of all of it. All thirteen-point-something billion years of our space-time, stretching gigaparsecs beyond the parochial scale of our imaginings. And beyond, past the firmament of our local physics, into a possibly multiversal infinity that goes deeper still, to terrifying deeps beyond deep.

God didn’t just make this small, rocky world. You look up to the twinkling stars, so pretty in the sky? That’s a great yawning vastness, filled with fire and emptiness and poison, where life is desperately rare and hangs on by a thread. In most of it, we Homo sapiens can survive about five seconds before we burn or freeze solid, assuming there’s no explosive decompression involved.

Creation is not just our world, dagflabbit.

We are not good at this kind of creation care anymore. In fact, we’ve gotten worse at it as we’ve progressed technologically as a species.

Oddly enough, the humans who lived at the time the Bible was written were more than aware of the terrifying reality of God’s work. The storm and the fire and the sea were terrifying. The One who made them all was to be feared even more. Life was short, and death was ever present. Premoderns were aware that they hung on by a thread, one that the Fates could cut on a whim.

But we moderns are coddled fools, wrapped in a few hundred fleeting years of industrial agriculture and fossil fuels and a false sense of our own power. Postmodernity, with its subjectivity and relativism? That hasn’t helped things either, as our grasp on the very idea of the real slips away. We whisper lies to ourselves in the closed minds of our social media #delusionchambers.

Our little bit of earth does not care about our desires and fantasies at all. If we sabotage our ecosystem, this ecosystem, we might survive. I hope we do. But the ensuing tumult of five thousand years of warming might also bring us down and leave another, less maladaptive species to rise in our place. Do we think creation cares? It does not.

Creation would continue as if nothing had happened. After a hundred million years, there’d be no trace of us at all. An epochal spasm of mass extinctions that could wash us away would mean little to our rocky world—just another epoch among epochs. It would matter even less on the true scale of creation.

This is, admittedly, a grim thing to say, particularly if you’re used to a faith that focuses only on personal benefits and prosperity. But what of God? Here I am, a follower of Jesus and a believer in God, and I’m supposed to be talking about hope and happiness. I mean, God does care, right?

God also allows us to reap the harvest we have sown, no matter what that harvest might be. That is the nature of both God’s love and God’s justice.

And sometimes God lets us die. In fact, God lets us die pretty much all of the time. One hundred percent of us die in the hands of God, being that we’re mortal and all.

Christians seem happy to forget this. Our God, say the progressives, is loving and inclusive and just. The God of the Bible, say the conservatives, watches over the Bible-believing righteous and has a plan for us all. Our God, say the prosperity-gospel churches, will make us all rich if we just plant a seed for our pastor’s new jet.

Not because God is a monster. But because justice is the nature of being, meaning that all systems in God’s creation seek equilibrium. This reality, which underlies the natural law of creation? It does not bode well for us right at the moment as we blithely, blindly traipse down a path to ruin.

So when I hear my fellow Jesus-folk singing earnestly about care for creation, and about how pretty and nice and fragile it all is, I know there is truth in that.

But that warm, easy, butterflies-and-rainbows sensibility does not mesh with the depth of the existential threat we have created for ourselves and our children. Our soft, green songs do not speak to the coming howl of the rising wind, or the searing heat of the sun, or the roar of the devouring sea. They do not sing of hardship and struggle or of the powerful, resilient faith that will be needed to survive the harsh and unforgiving world we have inflicted on ourselves.

I’m a pastor. I’ve felt a particular calling in my years of ministry to serve small congregations where my job is, well, peculiar. In little, intimate churches, the job of the pastor isn’t to be the executive or the manager. You’re not the patriarch or matriarch, he or she who must be obeyed. A healthy small church is more organic, with authority distributed based on giftedness and reinforced by trust. My role is to interpret, teach, and inspire my sweet corner of the beloved community to live out the gospel every single day. Abstract theology and Big Social Issues are only relevant insofar as they’re a real part of our lives together. Climate change may be big, but it’s also part of our lives, right here, right now.

And as a disciple of Jesus, I can say this with certainty: the gospel has a place in this new world.

Morality gives purpose, and it is the basis for framing and guiding action. What does that action look like? It looks remarkably like the traditional Christian virtues. Adaptability and hospitality. Sabbath keeping and humble living. Compassion for God’s creatures and grace toward all. An openness to all gifts and a learning heart. And above all, hope, hope in the face of our anxious fears.

This article is an excerpt from Our Angry Eden, chapter 1: Taking Care in God's Creation.

Rev. Dr. David Williams is the author of several books, including his critically acclaimed debut novel When the English Fall. His work has also appeared in The Washington Post, WIRED, Religion News Service, and The Christian Century, among other outlets. He is a pastor in the Presbyterian Church (USA) and currently serves Poolesville Presbyterian Church, a small congregation in Maryland. Before becoming a pastor, Williams worked for ten years at the Aspen Institute. He and his family live in Annandale, Virginia.