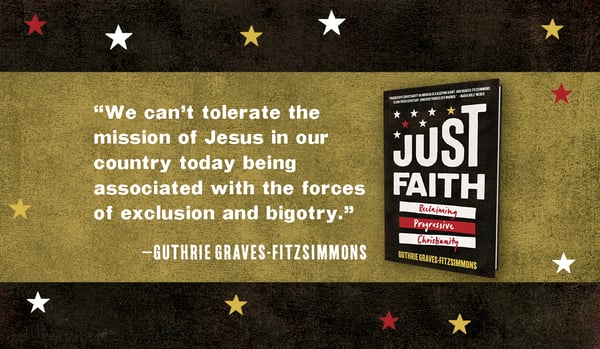 The bold tradition of progressive Christianity has been erased from our public imagination. The progressive movement has been cleansed of any religious motivations and the so-called secular left is pitted against the religious right. No, this book isn’t a eulogy for the tradition we’ve lost, but a plan for how we reclaim it. Reclaiming our tradition requires believing the status quo can be changed. We can contest the meaning of “Christian” in the public square if progressive Christians in the United States come together and do what’s necessary.

While I’ve been thinking about the state of progressive Christianity much of my life, the extent to which we’ve lost our tradition was made plain for me at one particular moment on October 4, 2018. The setting was the headquarters of the United Church of Christ in Cleveland, Ohio. Waiting in the lobby of the building before my meeting, I watched as a person came into the building off the street and approached one of the staff members. He asked, “Is this a church?” The UCC national headquarters staff member responded in a hushed tone, “Yes, but not that kind of a church.”

We are followers of Jesus. And while we should approach our calling with humility, there is no call to cower under the Goliath of conservative Christianity. Just as David had his sling, we need to harness the tools at our disposal. Thank God we’re not starting from scratch!

“Is this a church?” “Do you go to church?” “What are you doing on Sunday?” We’ve all felt the tendency to say, “I’m not that kind of Christian.” The ubiquity of conservative Christians can make us feel lonely and powerless to change our cultural definitions. There’s a good chance if you’re reading this book that you feel being a part of the Jesus movement is important to you. It’s important to me. And being willing to claim that publicly is our call and challenge.

One Gospel image fits the state of progressive Christianity right now: the disciples locking themselves in a room after the crucifixion. John 20 tells us that the disciples were locked inside the room because they feared the religious authorities. Their leader had just been executed in public alongside two common criminals, by the most powerful government the world had ever seen. He said he would return, but how could the disciples trust that?

The fearful and demoralized state of progressive Christianity is warranted. Many American Christians are wondering if Christianity will ever try to look like the love of Jesus. We can draw inspiration from the disciples, who had their hope restored in the Gospel stories by Jesus’s appearance to them after the crucifixion.

All of Jesus’s post-resurrection visits to the disciples are strange, like the Road to Emmaus story, where his own followers don’t recognize him. But in this story, Jesus suddenly appears before his disciples, coming into a locked room and telling them, “Peace be with you. As the Father has sent me, so I send you” (John 20:21). Jesus breathes on them and says, “Receive the Holy Spirit. If you forgive anyone’s sins, their sins are forgiven; if you do not forgive them, they are not forgiven” (John 20:22–23, paraphrase).

Yes, Jesus is telling us today, it’s scary out there. But this movement is up to you! Yes, the religious and political leaders are conspiring against us because we are a threat to the empire. Yes, I was just murdered for this revolutionary work. Yes, you might suffer the same fate that I did. And yes, you still have to leave the room. This mission of the Reign of God coming to earth, of the first being last, of setting the captives free, and of calling out the hypocrisy of religious leaders is up to you now!

I’m sure the disciples were worried. And I’m sure Jesus reminded them of what he said during the Sermon on the Mount in Matthew 6:25: “Therefore I tell you, do not worry about your life, what you will eat or what you will drink, or about your body, what you will wear. Is not life more than food, and the body more than clothing?” And in verses 33 and 34, “But strive first for the kingdom of God and his righteousness, and all these things will be given to you as well. So do not worry about tomorrow, for tomorrow will bring worries of its own. Today’s trouble is enough for today.”

We know Jesus reassured the disciples enough that they eventually left the room. They left the room and continued the movement that Jesus started. Jesus sent them, and they went. We’ve seen how, in just the last hundred years of this movement for love and inclusion, Jesus has sent so many people before us. And now, it’s up to all of us.

It’s time to leave the room. We can’t tolerate the mission of Jesus in our country today being associated with the forces of exclusion and bigotry. We are called to leave behind our fear at how the religious leaders and empire are conspiring and follow Jesus. We are called to resist the hijacking of Jesus’s message by conservatives and help reveal the radical nature of Jesus’s ministry and a just faith.

Guthrie Graves-Fitzsimmons is "on a mission to reclaim religion from political conservatives," according to Teen Vogue. A progressive Christian writer and activist, he has worked in faith-based public policy advocacy for almost a decade. He currently is a fellow in the Faith and Progressive Policy initiative with the Center for American Progress. And in addition to founding The Resistance Prays, he's a frequent commentator on religion and politics for a variety of national news outlets. He holds a master of divinity from Union Theological Seminary, where he was the William Sloane Coffin Scholar in Christian Social Ethics. He lives in Louisville, Kentucky, with his husband, Rev. John Russell Stanger.