The Pathological Desire for Niceness 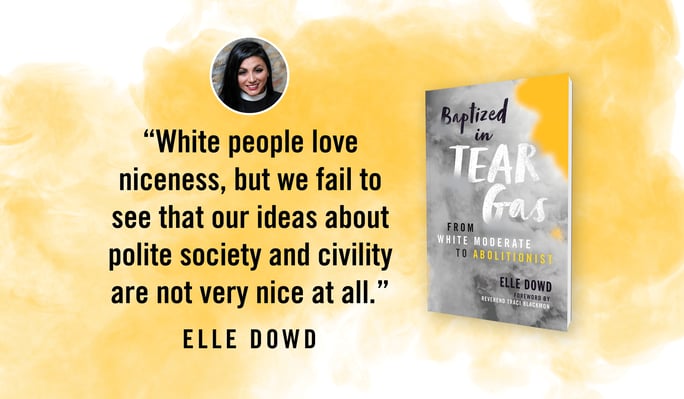 We white people love to think of ourselves as nice.

This is especially true of a certain brand of white people, many of us middle class and hailing from the Midwest. We pat ourselves on the back with pride for being [Your State Here] nice. Where I grew up, in a state that is about 94 percent white and filled with Lutheran churches, we liked to say we were “Iowa nice.”

But too often, niceness is about convenience. It’s about our comfort. It’s about control. It is our pathological desire for niceness that leads white people to look at young Black people crying out in the street and say,

“They should really say #AllLivesMatter.”

“I’m all for protesting, but do they really have to inconvenience other people?”

“No one is going to listen to them if they are going to be so rude like that.”

In other words, “Why can’t they be nice?” A nice that is tame, palatable, compliant, and always centers whiteness. For white people and white culture, niceness is a false idol. And it’s a false idol with a body count. Yet when our Black siblings are crying out, “Black Lives Matter!” we continue to make human sacrifices to the altar of our bloodthirsty god of niceness, caring more about our own comfort and security than about children like Mike Brown dying in the streets.

Body counts and blood sacrifices don’t sound very nice. But this kind of violence is a direct result of the dangerous relationship between niceness and power—which always finds a way to center itself on white ideals, white experiences, white feelings.

Most of us who are white live a life of unexamined privilege, and so the world seems at least mostly fair. Because we don’t experience systemic racial discrimination firsthand, it’s easy for us to assume that the world and its institutions are good or at least neutral. Most white people have a worldview that the playing field is level, except for maybe in a few isolated circumstances. But the truth is that the world not only is not neutral but is in fact actively and aggressively hostile toward people of color. There is a system in place that has benefited me and people who look like me, and it’s been in place for hundreds of years.

A world wrapped in whiteness sees the Ferguson Uprising and the Movement for Black Lives as aggressive. We don’t see where this anger is coming from because we assume that our systems are good or at least neutral. And so we assume this anger is unprovoked. We don’t see that what’s truly aggressive is racism, that white supremacy started this fight, that the Movement for Black Lives and activists in Ferguson are acting out of self-defense against a system that would see Black people be annihilated before it would see them be free.

That doesn’t sound nice. Because it’s not. And because white people value niceness so much, when we hear the truth about our participation in a system that leads to widespread bloodshed and death, it’s uncomfortable for us because it creates cognitive dissonance. And since we value our comfort above everything—even our Black siblings’ lives—we try to find a way to make it not true. Any reminder of our participation in the violence of racism becomes the object of scorn and disbelief, and we will find any polite way to undermine it.

White people love niceness, but we fail to see that our ideas about polite society and civility are not very nice at all. They serve instead to preserve a system that is criminalizing people of color and dehumanizing white people with our callous indifference. They act to protect institutions built on killing the bodies of people of color to the detriment of our own souls.

We say we value niceness, but we look away when the state, with our tax dollars and on our behalf, is slaughtering our siblings. We value “security.”

We say we value niceness, but we silence anyone who dissents against the genocide of white supremacy. We value “peace.”

We say we value niceness, but we find chants fueled with anger to be distasteful, cries punctuated with curse words to be vulgar, disregarding the true vulgarity: blood in our streets, murders committed on our behalf. We value “propriety.”

We say we value niceness, but we criticize the honest expressions of people who have grown up with unspeakable generational trauma. We sit comfortably removed from the embodied reality of their pain and critique the tone with which they tell us the truth. We value “civility.”

We say we value niceness, but this kind of niceness isn’t kindness or compassion or accompaniment or self-sacrifice. It’s not Christ’s example of emptying ourselves for the sake of the other. It’s the opposite—silencing and oppressing the other for the sake of ourselves.

We say we value niceness, but the truth is that we care more about being polite and comfortable than we care about liberation. We are worshipping at the altar of niceness instead of following the cross of Christ. This is an abuse of priorities that is abhorrent to the God who introduces Herself over and over as the one who brought us “out of the house of slavery.”

These ideas about niceness and civility are things that needed to die in me as part of this baptism into new life. They are things I struggle with still that have to die within me every day in order for me to be transformed, for something better to be reborn.

This is an excerpt from Baptized in Tear Gas chapter 2: Tension.

Elle Dowd is a bisexual candidate for ministry in the Evangelical Lutheran Church in America. She was radicalized in St. Louis, where she learned from the revolutionary, queer, Black leadership during the Ferguson Uprising. She was formerly a co-conspirator with the movement to #decolonizeLutheranism and currently organizes as a faith leader with SOUL in Chicago, serves on the board of Euro-Descent Lutherans for Racial Justice, writes regularly for the Disrupt Worship Project, and facilitates workshops on gender, sexuality, and the church. She lives in Chicago with her spouse and two Sierra Leonean daughters.