“If you don’t move, I’ll make you move,” he said, minus a couple of expletives.

A little context: I was standing in a football stadium, watching the reunited Guns N’ Roses perform. It was a dream I had harbored for actual decades, finally realized. A few rows in front of our seats, a large party hadn’t shown up, so my friend and I did what serious fans do: we tried to get closer.

As we shuffled into the better section, I gave the other folks in the row a nod. They nodded back. “We’re cool,” I thought. “These are real fans.” A few songs—and a few beers—later, without any provocation, our new neighbors changed their tune and started issuing threats. And they looked like the sort who might follow through. We returned to our seats, surprised and slightly emasculated.

On the way home it dawned on me: Those guys hadn’t tried to pick a fight by accident. It was why they had come in the first place. That, and to get “loaded like a freight train,” as Axl Rose would say.

Maybe I shouldn’t have been surprised. It was a Guns N’ Roses show after all. A good deal of their music features messages of hostility and debauchery. Sure, that’s not all there is—not by a long shot—but no one gravitates to GNR for their politeness. That concertgoers might also harbor an appetite for you-know-what makes perfect sense.

So perhaps our aggressors were the real fans and I was the pretender; my behavior was not as true to the “get in the ring” spirit of the band.

I knew what I had to do. As soon as I got home, I consulted mygnrforum.com.

Ever since browsing the internet became a daily and even hourly routine, I’ve lurked on various fan forums. Fan forums, for the uninitiated, are online message boards organized around a common interest. Fans congregate there to share the latest rumors, debate the hottest controversies, and generally hash things out. Forums are not hard to find, often centralized on platforms such as Facebook and especially Reddit.

I’ve long felt that fan forums represent the best of what the web has to offer: a destination to compare notes with people who won’t roll their eyes when you bring up your favorite topic, whether that be the NFL Draft, a particular eighteenth-century murder-mystery novelist, or a little-known kids cartoon from the 1970s. These forums can serve as a bastion of belonging in a lonely world.

Unfortunately, what starts out as a venue for connection and fellowship can all too often morph into a venue for ranking and proving, especially when supercharged by technology. Spend any time on a fan forum and, before you know it, a subtext of competitive enoughness will emerge underneath the discussions. Who knows the most? Who is the most loyal? Whose love is the purest?

You might say that certain fan communities, as they’ve grown larger and more specific, have changed from gracious havens for outcasts to stringent arbiters of self-justification and outright worship in which fans try to out-belong one another. The sweet camaraderie of early Trekkie conventions has been increasingly usurped by the viciousness of today’s Twitter mobs.

The internet appears to have turned many “cult followings” into actual cults.

The religious element of fandom has been there from the beginning. The very word fan is short for fanatic, which comes from the Latin fanaticus, meaning “of or belonging to the temple, a temple servant, a devotee.” In a classical setting, a fanatic referred to a person in religious employ who got carried away with their devotion to a specific deity. When the shortened fan entered into common usage around 1900, it was used to describe the baseball enthusiasts who emerged to fill the bleachers of the new professional leagues, a class of spectators whose allegiance to their team bordered on all-consuming.

As with other forms of seculosity, fandom itself has plenty of upsides. It usually starts as an expression of deep love and admiration. Meaning, I truly love the music of Guns N’ Roses—and not just the early stuff. The songwriting, the singing, the guitar interplay, the prolonged intros, the conflicting emotions—often within the same song—add up and connect with my heart on a profound level. Likewise, when a serious soccer fan talks to you about the game, its intricacies and history, the courage and strategy involved . . . what you hear is genuine love.

And that’s typically how their zeal is received. If you’ve ever competed or performed, you know that the cheering of onlookers encourages like nothing else. There’s a reason away games are a lot less pleasant than home ones.

What’s more, fandom provides a vital social glue, sometimes even an ersatz home for people who lack one. And not just virtually. The sense of belonging incubated in online fan communities frequently pours over into the world of brick and mortar. Like capital-R Religions and political parties, objects of fandom offer a shared story for people to inhabit together. A story with its own values and vocabulary to bond over, full of excitement and drama.

This applies just as much to the Red Sox curse as Harry Potter mythology. In the case of superhero fans, the story involves an ever-unfolding mythology where the imagination can run wild, a sandbox of sorts. With each new season, a sports franchise unspools a fresh chapter in that organization’s metanarrative for fans to escape into and be absorbed by, maybe even a venue for feelings that are otherwise off-limits to find expression. “Will this be the year?”

So fandom is not essentially malignant or modern. Like any form of affection, it runs the gamut from interest to infatuation, from crush to stalker. Which means you don’t have to dress up in a costume or lurk on forums to qualify as a fan. Fandom is big business. If you own a T-shirt or tote bag bearing the image of a team, band, or publication, or if you’d be willing to stick its logo on your car or computer, consider yourself a fan.

Seculosity comes into view when that fandom starts to look less like love and more like codependency. Fandom turns religious when it becomes the source not only of community but of identity, meaning, and redemption.

The first time I suspected there might really be something between me and the woman who would become my wife was when she made an offhand reference to one of my favorite movies. It was a relatively obscure film and not one that usually came up in conversation. “Huh,” I thought, “that’s interesting.” My confidence was shaken a few days later when she mentioned having recently attended a certain music festival, which will remain nameless. Let’s just say my appreciation for jam bands had yet to blossom.

I’m embarrassed to admit not just that I had the arrogance to test such an amazing and wide-ranging person, but also that I was using something as arbitrary as taste in pop culture as my barometer.

Looking back, I realize it wasn’t a coincidence. The seculosity of fandom was the small-r religion of my adolescence—a significant portion of my identity—which I then projected onto others too.

This means that I honestly believed the Favorites section under a social media profile said everything you needed to know about a person. Musical taste in particular provided me with a matrix of judgment, a way to boil things down and sift people, a means of making the world more manageable. Most importantly, it allowed me to feel superior to basically everyone. Your favorite group is the Spice Girls? “Pfff!” You say you listen to whatever’s on the radio? I say, “We’re not living in the same universe.”

At the time I probably would’ve fed you a line about aesthetic sensitivity and the importance of good taste, but like most forms of snobbery, the real motivations had more to do with control and insecurity.

Of course, before my affinities calcified into a means of self-justification and judgment, they served as points of connection and sympathy. Going to concerts and record stores, trading mixes, waiting in line for a midnight release—these were friendship-making events, and they account for some of the most precious relationships of my life. And yet, if we are who we enjoy, what happens when a band we adore jumps the shark? This kind of overidentification is precarious, to say the least. Just talk to some Weezer fans.

Those cooler-than-thou days seem pretty tame when you compare them to the holy wars waged on social media by de facto armies of superfans. Now when others criticize our favorite pop star, they are profaning something sacred, and it is our duty to retaliate, even persecute. If Beyoncé gets disrespected, the Bey-hive mobilizes, and you better hope you’re not their target. Same with Justin Bieber and the Beliebers.

Again, by this logic, if Disney makes a disappointing Star Wars movie, it isn’t just an exercise in poor judgment or pandering; it’s a threat to my self-understanding on a fundamental level. How else to explain the vitriol?

Conversely, with fandom there’s a redemption on offer. When my team wins, I win. When my favorite band does well, I am vindicated or exalted. Call it vicarious atonement or imputed glory—it’s all quite theological at bottom. 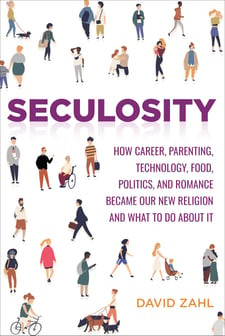 To learn more about Seculosity (new and revised), click here.

David Zahl is the founder and director of Mockingbird Ministries, editor-in-chief of the popular Mockingbird website, and cohost of The Mockingcast. He and his family live in Charlottesville, Virginia, where he also serves on the staff of Christ Episcopal Church. Zahl is the author of A Mess of Help: From the Crucified Soul of Rock N' Roll and coauthor of Law and Gospel: A Theology for Sinners (and Saints).