The Widening Gap of Economic Inequality

We’ve seen that our nation is experiencing levels of economic inequality that haven’t been seen since before World War II. Our inequality is particularly pronounced along race and gender lines, lines that hanve been historically unequal.

But does this matter?

For six years of my childhood, my family lived in Germany. My father was stationed there multiple times as an army officer. In our last tour, I was in middle school. My junior high years coincided with a historic shift in the country. We moved to West Germany in 1988. We experienced the collapse of East Germany, which had spent more than forty years as a Soviet- allied Communist country. We witnessed the fall of the Berlin Wall and watched as reunification happened around us. The night before we flew home to the United States for good, my family of four crowded around the TV in a cramped hotel room. The Bundestag had just voted to move the nation’s capital from Bonn back to Berlin. Germans were celebrating in the streets.

During this dynamic period, we lived in the Nuremberg area, a little over an hour’s drive from the East German border. After the collapse, my German teacher organized an exchange program with a school in the picturesque former–East German town of Oberwiesenthal, on the border of Czechoslovakia. For a week, my classmates and I lived with local families and went to the local school. We sat in on small-town life in this village that was newly opened to the Western world.

I loved the people I met. The host family I stayed with was warm and funny, and the students curious and inviting. I even remember visiting the town’s local ski resort, which, if I remember correctly, was famous in the region for its ski jump.

But I also remember the stark contrast I witnessed between Oberwiesenthal and the Bavarian region I had called home for over two years. Everything seemed worn. The construction was drab and monochromatic and ran counter to the vibrant spirit of the people I was getting to know. Cars were functional but dated. Even the clothes of the residents were more muted. While I did not see evidence of absolute poverty, the median standard of living, from all appearances, was much lower than what we had witnessed in towns throughout Bavaria.

I have taken from that the personal belief that forced equality is not a solution. It is impractical at best, tyrannical at worst, and ineffective through and through. I know of no Communist economies from the 1970s that have held onto the bulk of their market restrictions and are better off today than they were then.

Cold War Eastern Europe and Soviet Russia had national narratives around the virtue of equality that ultimately impeded their people’s abilities to thrive. But today, we in the United States are building up a national narrative around the virtue of inequality—a narrative that is holding us back. We tell ourselves that inequality encourages innovation, hard work, and entrepreneurship. By allowing people and corporations to capture extremely large shares of the returns from their work and risk-taking, we encourage that behavior. This, we say, has led to a rising tide, which lifts all boats in our country.

When we reward risk and allow people to capture the benefits of their hard work, we are ensuring more risk-taking and hard work. But the accompanying inequality we have created does not always coincide with economic advancement. American economist Heather Boushey says, “We have to get rid of the false story that we need to create inequality to grow the economy.” Forcing disproportionate inequality is not necessary for economic growth. We have already seen that it wasn’t so in the 1950s and 1960s, when we had far less inequality and our economy grew at a pace we envy today. It isn’t true now.

Let’s start by painting a picture of how many Americans experience inequality in their daily lives. We have seen how stagnant or declining income and rising inequality place a ceiling on what Americans earn. But look down, and we see a fast-moving floor of debt and expenses rising. As income has plateaued for most Americans, basic household expenses such as health care, housing, and childcare keep going up. The result is what I think of as the “great squeeze.”

If basic costs like health care and housing are increasing, are most Americans saving money on other necessities? The short answer is no. The United States Department of Labor collects and publishes annual data on consumer spending—the Consumer Expenditure Survey. By comparing similar spending categories over time, we can see how basic spending needs are eating up more and more of families’ budgets.

Let’s examine spending across four areas I think of as “basic needs”: food, housing, health care, and transportation. In 1999, the bottom fifth of households spent much more than their income on these areas of basic need. This meant discretionary items like entertainment, education, or clothing had to be financed out of debt or savings. By contrast, the top fifth of households only spent 42 percent of their annual income that year on these basic needs, leaving the majority of their income to be spent on discretionary items, invested, or saved.

One final area I want to call out is childcare. Even though the Consumer Expenditure Surveys do not specifically report childcare costs, as a parent I can attest that this is a major part of many families’ budgets. As in other areas of basic needs, we see a similar trend of childcare costs rising faster than household income. For women who paid for childcare in 1988, the average monthly costs equaled 7 percent of their income. By 2011, those costs had grown to 10 percent.

The costs of basic needs like health care, housing, and childcare are rising faster than most wages are rising. As more of their income is being eaten up by basic needs, middle- and low-income American households are losing the ability to invest in their futures.

Looking at how Americans’ savings habits have changed over time illustrates how many families are feeling the squeeze. For most years between 1959 and 1980, the personal savings rates for American households hovered between 10 and 15 percent. In the mid-1980s, this began to decline steadily, hitting a record low of 2 percent in July 2005. In July 2019, it sat at 7 percent. As a result of such low savings, the Federal Reserve reports that 40 percent of Americans couldn’t cover a $400 emergency expense.

Preacher and political organizer Jamaal Nelson has felt this in his own life. He shares, “There is this tremendous squeeze. If you look at [my family’s] income, you would say, ‘Golly, Jamaal, you do super well. Solid middle class.’ And yet, the cost of living is just so explosive.” The crisis is exacerbated for the poor and the working class. “Just think about folks who don’t have even the economic privilege I have,” Jamaal adds. “These are folks who are stuck, perpetually underemployed or unemployed. The debt that they’ve got to rack up [just to pay basic expenses]. The system really is built to prey upon the lower classes and middle class. Their debt in many ways is feeding the wealth of the top 1 percent.”

As Jamaal sees it, the great squeeze is not only a by-product of rising inequality but a driver of it. The great squeeze feeds inequality. We have a “struggling middle class,” Jamaal points out, but unfortunately, the national narrative about autonomy and responsibility hasn’t changed. “For the wealthy, we say take the money you have inherited and keep living cool,” but for everyone else, the message remains “live beneath your means, save to invest in assets.” In fact, it is almost as if we are moving the goalposts for the middle class and the working poor.

What Jamaal points to is something akin to what French economist Thomas Piketty notes in his groundbreaking bestseller Capital in the Twenty-First Century. Through his research, Piketty uncovers that in contemporary Western countries, slowing economic growth has resulted in returns on capital being higher than income growth. Or put another way, having money makes you richer than working for money does.

Piketty believes that in many countries, average returns on capital (e.g., business profits, stock dividends, and real estate appreciation) will remain between 4 and 5 percent per year, while economic growth will continue to lag behind at 1 to 1.5 percent. When this happens year over year and decade over decade, those who have inherited money will earn more on their wealth than most Americans who build their wealth from their labor earn on theirs. This means the benefit of having been rich yesterday (or having had rich parents or grandparents) is greater than the benefit of working hard today. Because our economy returns more to those whose wealth was accrued at some point in the past than it does to those who work to amass wealth today, Piketty sums up the phenomenon as “the past devours the future.”

When you layer this phenomenon on top of what we have already seen—rising costs and stagnating wages—it is nearly impossible for the average American to buy into the cycle of wealth. The story that if people “work hard and play by the rules,” as President Clinton put it in his 1992 presidential campaign, they can grab hold of the American dream is becoming less and less true. Our economy rewards being rich more than working hard. And some Americans are beginning to notice.

Americans are no longer “rewarded by the sweat of our brow,” Jamaal concludes. Getting wealthy “is really about being in the club, which very often intersects with race, with whiteness. If you’re in the club, you have a much easier time achieving wealth irrespective of how hard you work.” What he doesn’t say, but what is understood, is that if you are outside of the club, no matter how hard you work, the dream of achieving wealth will continue to fade into the distance.

This is the tragedy of the great squeeze in a world where wealth is determined more and more by capital and less by income.

American families are feeling this squeeze. They can’t afford the same level of basic essentials they could thirty years ago. They save less. They feel at risk of financial setback or even calamity should an unplanned expense creep up.

Yet they see the GDP growing and sense that the rich are just getting richer. This dissonance tears at the sense that we are Americans bound together across differences. This places our society at a dangerous precipice: we are teetering over and looking down upon an irreparably divided country.

When we zoom out from the perspective of an individual family, we see economic inequality waging a war on our national well-being on multiple fronts. This inequality coincides with a broad range of social ills and challenges the social fabric our democracy needs to thrive. It runs counter to one of our most fundamental American values: that it is the collective strength across our differences that makes us uniquely American. 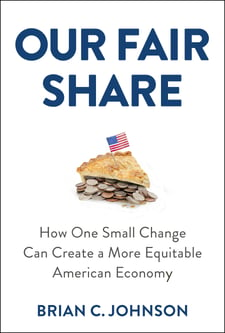 This is an excerpt from Our Fair Share chapter 6: Economic Inequality Puts Pressure on Everyday Americans.

Brian C. Johnson has served in education and advocacy, community organizing, and political activism at local and national levels for two decades, dedicated to the American promise of fairness for all. He's been featured on CNN and in The Washington Post, USA Today, and The New York Times. Johnson currently serves as the CEO of Equality Illinois, one of the nation's most successful LGBTQ civil rights organizations. He lives with his husband and their daughter in the Lincoln Square neighborhood of Chicago, Illinois.