Values Light Our Way: A Conversation with Brené Brown 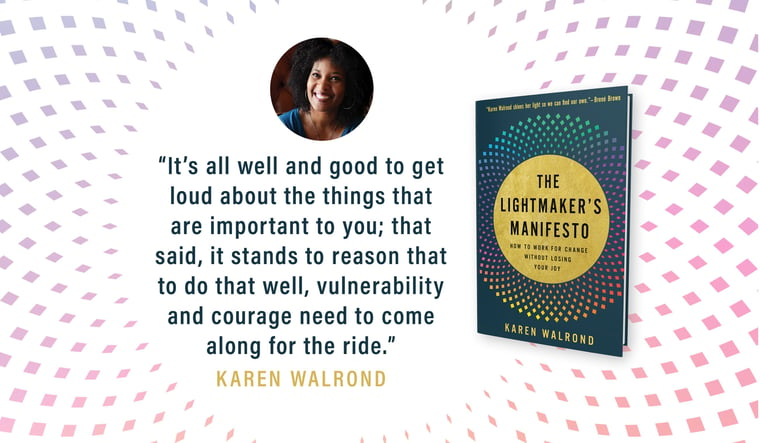 Integrity will almost always include an interplay of both courage and vulnerability. I’m lucky to have a close friend who not only fiercely models integrity in her own life, both online and off, but who has built much of her internationally renowned work around it.

Brené Brown and I have been friends for more than a decade; I met her when, in her words, she was “just a girl with a book and a blog.” A research professor at the University of Houston, Brené has spent over two decades studying courage, vulnerability, shame, and empathy. She exploded to global prominence when her TED Talk, “The Power of Vulnerability,” became a viral sensation. Since 2010, when it was first published, it has been viewed almost fifty million times. In the decade that followed, Brené has published several number one New York Times bestsellers, starred in her own Netflix special about her research, and even had a cameo in a movie created by and starring Amy Poehler, a huge fan of her work. Through it all, Brené has remained a fierce friend, one who is rock solid in her own values and what she stands for.

Brené’s work is quoted constantly by devoted fans, but one quote in particular that appears all over the internet is about integrity. “Integrity is choosing courage over comfort,” she says. “It’s choosing what’s right over what is fun, fast, or easy. It’s choosing to practice your values, rather than simply professing them.” This is a pretty profound statement, and while it’s easy to quote, it’s much harder to practice. But Brené lives it. In recent years, I’ve watched my friend wade into activism on behalf of Black Lives Matter and LGBTQ+ issues and speak up loudly against discrimination in all its forms. Given her meteoric success, I’ve wondered if she has ever worried about how much she has to lose. Her unwavering commitment to equality and belonging could quite literally alienate a considerable percentage of the people who have loved her work.

Because we live in the same city, whenever Brené and I get together, it’s usually for a long walk. But for this conversation, given the trajectory of the COVID-19 pandemic at the time, we decided that the safest way to connect was through videoconferencing. We quickly caught up on our families and personal news before getting to the reason why I’d called.

“By all accounts, you’ve made it,” I began. “You’ve got a really successful career, and it’s been such a personal joy to watch your work evolve. But I’ve noticed that in recent years, you’ve been really taking on racism and other types of discrimination and doing so in ways that look really brave to me. Having lived as a Black woman and an immigrant in this country, I know these are conversations most people are really uncomfortable having, so I imagine it takes some serious courage for you to even broach the subjects. Why even take the issue on?”

She thought for a minute. “It’s interesting; I haven’t really talked about this.” She thought for a moment longer, and then started speaking slowly. “This is a brand-new aha for me: I think the reason my work resonates so much is because it’s not the work itself that people are drawn to. People are actually drawn to watching me struggle with the work. I’m like, ‘Here’s what the research says, and it’s messed up and I don’t want to do it either, but here’s how I’m trying and failing, and trying and failing.’ That’s what people want to watch. If I were unwilling to take on hard topics because I can’t do them perfectly, that would bankrupt the entire premise of my work.”

I smiled, but I wasn’t convinced. I pushed harder: “I mean, I get that. But here’s the thing: no one would have to know. You could simply continue talking about courage and shame—hard topics in and of themselves—and never actually say much of anything about racism or bigotry or discrimination, without anyone being any the wiser.”

She frowned. “But I would know,” she responded, as if it were silly to even suggest otherwise. “Besides, this is who I am. This isn’t new: I’ve been studying discrimination and oppression for a long time. Remember, I have a bachelor’s degree, master’s degree, and a doctorate in social work. Over the course of my education, I’ve taken classes on racial discrimination. I’ve taken classes on systemic oppression. I came to the University of Houston to do my education and remained because U of H had the only graduate social work program with a political concentration in the nation. I wrote papers on white supremacy twenty years ago. My very first book, the one I self-published, talks about privilege and shame.”

I nodded slowly, thinking about all the books she has written that I own and have read. “Honestly, I hadn’t thought about how much social work would necessarily require study in those topics,” I said.

“Right,” she smiled. “So I’ve put out this big body of work, and people have attached to it and made it what they needed it to be. And the majority of the followers of my work—mostly white women—need my work on courage to be soulful and spiritual. So when I call on my education and say something like, ‘The system’s not broken; it’s working just like we designed it—and by we, I mean white people,’ they’re immediately put off. They’re like, ‘Oh, no, no, no, don’t talk about that.’”

She became even more passionate. “But honestly, Karen, if people choose not to examine the part of my work that talks about barriers to belonging, or skipped those pages in my books, then they don’t know my work as a whole. Because of my research and education, there is no work on courage and empathy and belonging without also tackling racism or discrimination or other issues of disenfranchisement. Those are the bones of the work. Dehumanization is the bones of the work. How could I not weigh in on hard conversations about those topics?”

At this, her eyes narrowed. “You say my tackling this is brave, but let’s never forget: I can wade in these conversations, be perceived as brave, and then return to a white life of relative safety and privilege. That’s not bravery. That’s not courage. That’s just doing the right thing. And if we’ve gotten to the point in this world that doing the right thing is seen as ‘heroic’? Well . . .” she inhaled slowly. “That’s an effin’ nightmare.”

I suspect that Brené’s ease with tackling difficult subjects is grounded in the fact that she has been practicing courage for a long time now. According to her research, the intensely uncomfortable feeling of vulnerability is the greatest measure of courage that we have. In fact, she maintains that there isn’t any courage without vulnerability, because they are inextricably linked. Activism, while often clearly viewed as “the right thing,” involves a heaping helping of vulnerability as well. It’s scary to stick your neck out for a cause when the entire world seems to be arguing for the opposite. It’s all well and good to get loud about the things that are important to you; that said, it stands to reason that to do that well, vulnerability and courage need to come along for the ride.

So this begs the question, How do we cultivate courage? Ultimately, courage is a practice, one we must keep returning to. As Brené would say, we don’t have to be perfect—just engaged and committed to aligning our values with our actions. “I have this motto when I’m in hard conversations,” she told me. “I say, I’m here to get it right, not to be right. I just repeat that over and over again. I’m here to learn and evolve, not to win arguments. So, if you think about it, it’s nuts: I’ve got those degrees and probably thirty hours of graduate-level courses on oppression, racism, and systemic problems, and I still have to have crazy practices to stay in awareness about what’s happening.” She sighed. “No one said this was easy.”

That’s a fact. As I’ve watched Brené navigate her own activism journey, she has taught me that cultivating courage requires becoming clear—and I mean crystal clear—about our values. When we can name and stay rooted in our values, then doing the right thing suddenly doesn’t feel so much “brave,” as Brené says, as it does simply “the only way forward.”

Values, it turns out, light our way.

This is an excerpt from The Lightmaker’s Manifesto chapter 5: On Integrity, Empathy, and Kindness as Resistance.

Karen Walrond is a lawyer, leadership coach, activist, and senior director for global engagement for the Brené Brown Education and Research Group. A Certified Dare To Lead™ Facilitator, Walrond has helped thousands of people around the world find purpose and meaning in their work. As a photographer, she traveled throughout Africa with the ONE Campaign and serves on the board for the Houston Coalition Against Hate. Walrond and her work have been featured on PBS, Huffington Post, CNN.com, and The Oprah Winfrey Show. Her award-winning blog, Chookooloonks, is a lifestyle, inspiration, and photography destination. A sought-after speaker, Karen is the host of the highly rated podcast The Make Light Show, the author of The Beauty of Different, and a contributor to Disquiet Time and Expressive Photography. Karen, her husband, and their daughter live in Houston, Texas.